Color is a process that occurs when light of an object. Everyone will love the color because of the presence of color can give beauty and aesthetic value. In addition, the color is also considered to have an influence on one's psychology.

Most people will choose the colors according to each character so that one's favorite color is sometimes not the same. The colors are so useful in human life. The identity of a specified color of the light wavelength. For example, the blue color has a wavelength of 460 nanometers. 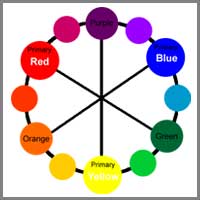 Color wavelengths that human eyes can still be caught between the 380-780 nanometer range. Talking about the color will not be separated from the color theories expressed by some experts the following:

Newton conducted experiments and concluded, if conducted solving the color spectrum of sunlight, the colors will be found a wide range consisting of red, orange, yellow, green, blue, and purple. These colors can be seen in the rainbow.

Brewster theory was first declared in 1831. This theory simplifies the colors that exist in nature into 4 groups of color, the primary colors, secondary, tertiary, and neutral colors. These color groups are arranged in a circle of color brewster. Brewster circle explained the theory of complementary colors, split complementary, triad and tetrad.
Brewster theory called the circle of colors that are widely used in the art world.

In 1858, investigated the Munsell color with color standards for the physical and psychological aspects. In contrast to Newton and Brewster, Munsell said the basic colors of red, yellow, green, blue and orange. While the secondary colors of orange, light green, dark green, dark blue and indigo.