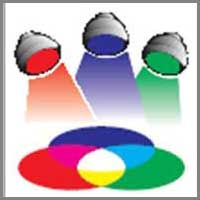 RED
The color red is the color at the lowest frequencies of light are visible to the human eye. Red light has a wavelength of about 630-760 nm range (nanometer). Red light is the first light absorbed by seawater, so many fish and marine invertebrates saga appears red (bright red) to look black in their native habitat. Red is one of the additive primary colors, is the complement of the color cyan (greenish blue). At lower frequencies are called infrared, or far red.

GREEN
Green was also one of the additive primary colors and is the complement of magenta (purplish red). Green remedy, and the colors are often found in the leaves is useful for reducing stress. Green is the type of color between yellow and cyan.