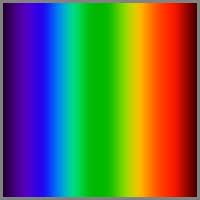 Normal human eye can receive wavelengths from 400 to 700 nanometers (nm), although some people may receive a wavelength of 380 to 780 nm. Eyes that have adapted to the light typically has a maximum sensitivity around 555 nm, in the green region of the optical spectrum. Mixing colors like pink or purple, not present in this spectrum because these colors will only be obtained by mixing several wavelengths.

The following limitations to the colors of the spectrum:
Although the optical spectrum is a continuous spectrum, so there are no clear boundaries between one color with another color,